High vibrations / noise and repeated cracking of runner blades (Fig. 7.45) were experienced on practically all units of 6×60 MW, 167.7 RPM (specific speed 263 metric) hydro station. A large number of cracks were detected in the runner blades of almost all the individual units after about 13000–15000 hours of operation of the machines. The design head for the machines was 66 m; however, due to changes in the hydrological conditions, excessive rainfall in the catchment area of the dam, the machines had operated at a head higher than even 90 m for a considerable amount of time. Additionally, the machines exhibited severe vibration and intense noise behaviour.

The scanning and electron-microscopic examination of the fracture surface of the failed blades revealed that these failures had taken place due to fatigue.

Considering the fact that the machines had been exhibiting high vibrations / noise from the time they were commissioned it was necessary to study the vibration / noise behaviour of the machines at two head conditions, namely 90 m and 60 m at various loads. For this purpose, a detailed investigation comprising of vibration / noise and pressure-pulsation measurements was undertaken. Figure 7.43 shows the location of various transducers used for this purpose. The analysis of vibrations at various bearings of the unit and the analysis of noise at the draft tube and turbine pit showed that at 90 m head, the dynamic behaviour of the machine is extremely rough whereas the same, when the head became 62 m a few months later, became relatively quite smooth. The draft-tube noise level, which at 92 m head was 112 dB, came down to 105.2 dB when the head became 62 m; the noise levels in the turbine pit also came down from 106 dB (at 90 m) to 103.7 dB (at 62 m) when air was injected below the runner. The vibration-spectrum analysis carried out on the turbine-and-generator bearings (head 92 m), showed a prominence of 42 HZ and 245 HZ. Out of these frequencies, the 42 HZ frequency corresponds to runner-blade-passing frequency (15 runner vanes × 2.8 HZ rotational speed). The vibration spectrums at 62 m also showed very low levels of these components (Fig. 7.44). The calculations showed that 245 HZ corresponds to the vortex-shedding frequency. 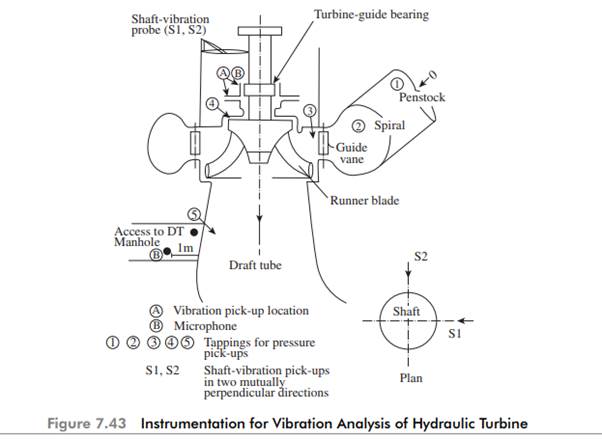 Since the failures were found to be caused by fatigue it was necessary to find the natural frequency of the runner vanes. For this purpose, one of the uncracked runners was subjected to modal test to determine the various natural frequencies and the mode shapes. 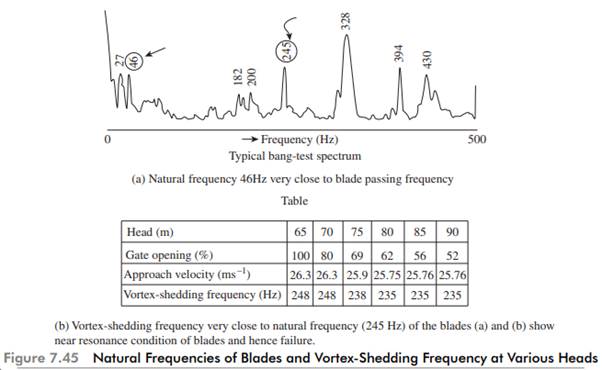 The test (Fig. 7.45) revealed that the runner has two frequencies, 46HZ and 245HZ, in the domain of our interest. Out of these, 46 HZ and 245 HZ correspond to the bending and torsional modes. It may be noted that these frequencies were detected on the runner in air; and thus, they may come down slightly in water due to added mass.

Based upon these findings, it was concluded that the fatigue failure of the blades had occurred on account of resonance / near resonance at 42 HZ and 245 HZ (blade-passage frequency and vortex-shedding frequencies in the close vicinities of natural frequencies) under prolonged operation at off-design head conditions. To solve the problem, the trailing edges were thinned down and chamfered to 45°. Also, injection of air below the runner to break the trailing-edge vortices was suggested. The problem of runner cracking ceased after the modifications.

Do you want a uniquely written paper on the same topic? Hire an expert writer now.

We are a dedicated team of essay writers available for hire 24/7 for timely delivery of plagiarism-free and well researched papers. Get in touch with us.